Markets have flipflopped this week, rising and falling and rising again. It’s been a busy week of fundamental news, with the IEA, EIA, and OPEC all reporting monthly updates and forecast revisions. The general theme from the three releases was that the current price environment will likely extend into 2018, with prices hovering in the $50-$55 range. U.S. production is expected to put the lid on prices; higher prices would incentivize U.S. producers to increase their output, bring prices lower once again.

Crude prices began the week at $49.25, and opened this morning at $50.73, a gain of $1.18 (+2.3%) for the week, the largest weekly gain in four weeks. Prices started the week strong, with markets expecting firmly bullish reports to push markets higher. Prices languished on Wednesday when a late API report showed a crude inventory build, but the market quickly reversed course on Thursday when the EIA, the more authoritative source, showed a stock draw instead.

Diesel prices have risen this week, partially buoyed by crude prices, but also propelled by the EIA report. While the API report showed a diesel inventory build, the EIA showed a stock draw, helping to turn markets around on Thursday. Prices on Friday morning were following crude higher. Diesel prices gained 6.3 cents (+3.6%) for the week, outperforming crude prices, to open on Friday at $1.7672. 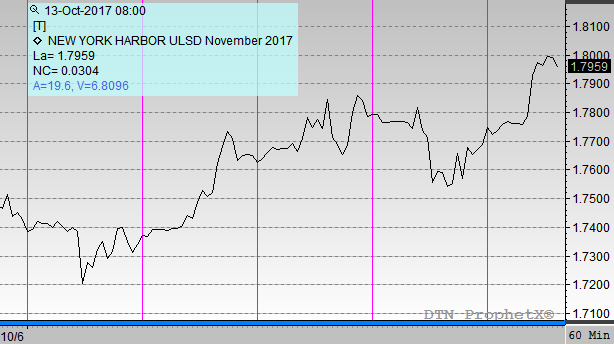 Gasoline saw generally similar movements to other oil products this week, though with less pronounced gains. Unlike crude and diesel, the API showed a stock draw for gasoline, while the EIA showed a build, putting a damper on price increases yesterday. Prices have gained 3.04 cents between Monday and Friday, a build of just 2.0%. Normally that would be strong growth, but compared to crude and diesel prices it’s relatively weak.