After several days of gains for the oil complex, crude and refined products took a small breather overnight. Prices are generally flat with slight losses across the board. Crude prices gave up 4 cents (0.07%) since yesterday’s close and are now $54.11.

Refined products have both seen gentle losses this morning after yesterday’s gains. Diesel closed at $1.8777 on Monday, its highest level since mid-2015. Diesel is approaching its highest demand season with tighter-than-normal supply, which is one element that could be supporting the diesel market. Inventories are below last year’s levels as well as the 5-year average. Diesel lost 44 points this morning (.23%) and is currently $1.8733. Gasoline gave up 57 points (.32%) leaving prices at $1.7584. There is some backwardation in the market as seen by the December RBOB (Gasoline) contract which is trading nearly a nickel cheaper than the expiring November contract.

Monday’s crude closing price of $54.15 was the strongest the market has seen since February 23rd, bringing WTI near its highest level of 2017. December Brent continues to push higher closing yesterday at $60.90, the highest price since July, 2015. However, December Brent will expire today and January Brent, which is currently trading 30 cents cheaper, will take the prompt spot. The spread between WTI and Brent remains wide at $6.75/bbl, which should keep U.S. exports high.

API data will be released this afternoon. Markets are expecting an overall draw across crude and refined products yet again, which would give markets some renewed strength. Stock levels have continued to trend downwards lately. As OPEC cuts continue to take hold, inventories world-wide have been drawn lower. 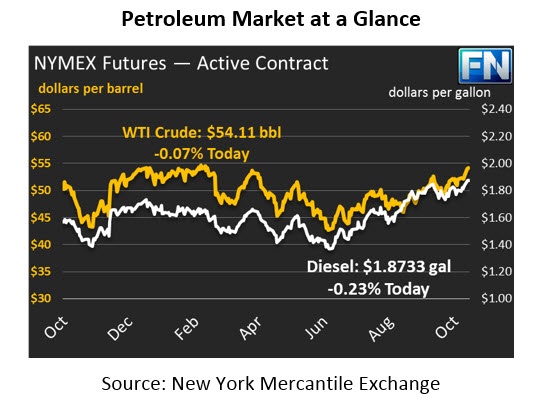