Yesterday was a good day for consumers. Across the board, energy markets dragged yesterday, with crude, diesel, and gasoline all giving up at least 2% during trading hours. Crude is trading flat this morning, as markets are looking at technicals to inform trading. The technicals are pointing towards a bearish bent as traders lock in their profits and leave the market, but today’s API report later today could change that bias. Crude is currently trading at 50.28, just .30 (0.6%) below yesterday’s closing price.

Gasoline demand has been weakening in recent weeks as we’ve moved out of the summer driving season, causing gasoline prices to drop, a normal phenomenon during this time of year. Gasoline prices are $1.5433 this morning, down 1.2 cents (0.8%) since yesterday’s close.

The dollar is up nominally this morning, helping to keep prices subdued. Markets are further reacting to increases in OPEC demand. A new survey estimates that OPEC production rose by 120 kbpd in September, higher than yesterday’s survey indicating 50 kbpd growth. Official numbers will be released later this month, but the surveys point to overall higher production, which would help bring prices lower.

Markets are growing increasingly bullish; the CFTC reported that net length of money managed positions (the volume of institutions, such as hedge funds and investment banks, betting on oil prices going up less the institutions betting prices go down) has grown for the past few weeks. Net length dropped as low as 138k during Hurricane Harvey and Irma, as traders fled the market. Today, net length is nearly double that level, at 261k. That’s still a long way off from the 2017 peak of 405k net length, which occurred in February when the OPEC deal was the center of market attention. Still, the rapid run-up in traders betting on higher oil prices created some overheating; that’s partially why oil markets have blown off steam the past few days. 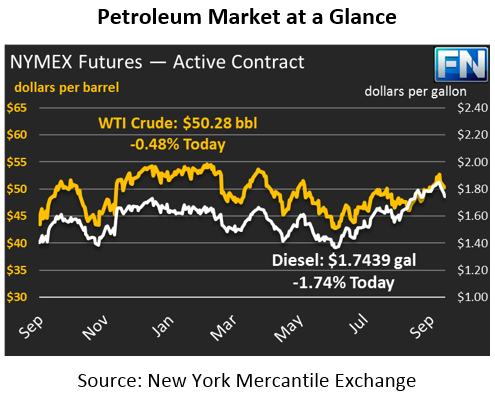