Crude prices are $49.77 this morning, down $.12 from yesterday’s close. Prices were unable to maintain yesterday’s price level above $50/bbl, which has been the norm over the past few months. As the chart below shows, prices have bounced off the $50 level a few times since May, but have not been able to break through resistance levels.

Diesel prices are also up this morning by 80 points, at $1.7859. Diesel prices have been trending at 2-yr highs this week, and if today’s gains hold they will make four straight days of diesel price increases. Increased generator activity from the storms, heavy demand from first responders, and the fast-approaching fall harvest season are all combining to help keep diesel prices higher.

Prices have shot higher over the past few days in response to higher crude demand from refineries in Houston, nearly all of which are back online now. Thirteen out of twenty of affected Gulf Coast refineries are either at full capacity or at nearly full capacity. Of the remaining seven, five are restarting operations.

At the same time, OPEC has reported its production levels falling, and the organization is entertaining the idea of extending cuts beyond March 2018. For OPEC, the question remains how to reign in Libyan and Nigerian crude production; both countries were excluded from the initial deal, and they’ve been ramping up production quickly. If OPEC can get those two countries to fall into line, markets would likely respond with enthusiasm, pushing prices higher. Of course, higher prices means higher incentive for countries to cheat, and certainly means higher U.S. production. Whatever happens, the pendulum of prices and production will continue rocking back and forth.

Yesterday, North Korea fired another rocket over Japan, coming just a week after news came out about a nuclear test. Jitters over North Korea have sent the dollar lower, which has been bullish for oil prices. Since North Korea and Japan are not major producers, any instability in the region would not directly cause prices to rise – rather, it would affect the dollar, which would more subtly influence prices higher. 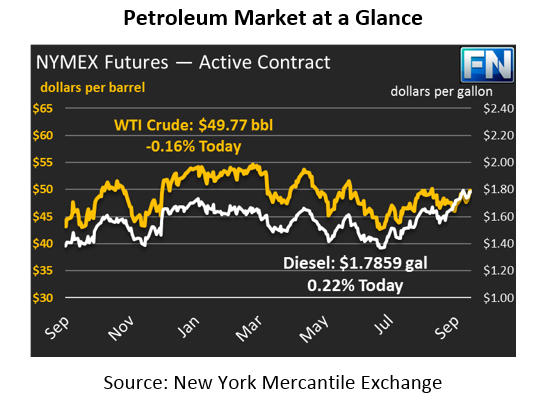