Refined products strengthened yesterday and this morning following the EIA report. Diesel prices increased slightly, gaining 97 points (-.60%) cents yesterday, and are now at $1.6341. Gasoline performed better than crude or diesel, gaining over 3 cents during yesterday’s trading session, and over 2 cents (1.66%) this morning, bringing prices up to $1.6458 and surpassing diesel prices by over a penny. Tropical Storm Harvey and the EIA report are both components supporting gasoline prices.

Tropical Storm Harvey continues to strengthen as it makes its way to the southern Texas coast. The National Hurricane Center forecasts point to slow movement, increasing chances for heavy rainfall and dangerous flooding. The National Weather Service (NWS) has issued an advisory for Corpus Christi saying that Harvey is forecast to become a hurricane. NWS says that rainfall could possibly total 15 to 20 inches, with as much as 25 inches in isolated amounts. Five refineries in the Corpus Christi area produce 868,000b/d, making up 4.2% of total U.S. capacity. Harvey could become the first hurricane to strike Texas since 2008. 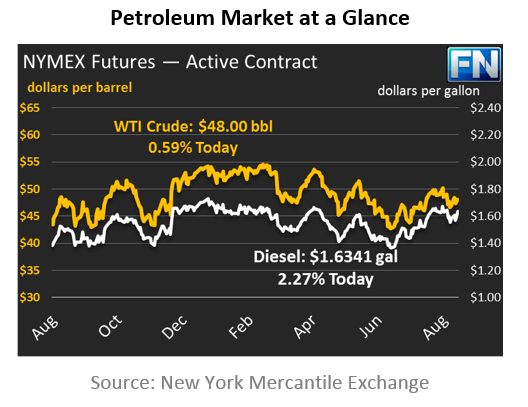