Pipeline to Mexico: Natural Gas Project on Track For Completion

Valley Morning Star reported: BROWNSVILLE — It’s hard to miss for those who have driven S.H. 48 in the vicinity of the Brownsville Ship Channel during the past several months: Valley Crossing Pipeline, currently under construction to supply fracked natural gas to Mexico from the Eagle Ford Shale oil fields in Central Texas. The $1.5 billion pipeline, being built by VCP parent company Enbridge Inc., is not related to liquefied natural gas projects proposed for the Port of Brownsville. Rather, it’s being built to supply Mexican power plants as that country transitions from coal and imported LNG in the wake of sweeping energy reforms. The pipeline will receive gas from the Agua Dulce gas hub in Nueces County. The 168-mile-long, 42-inch-wide pipeline is expected to be in service by October 2018, with a capacity of up to 2.6 billion cubic feet of natural gas per day, according to Enbridge spokesman Devin Hotzel, who responded to questions via email. For more visit valleymorningstar.com or click http://bit.ly/2yWUcwG

Bloomberg reported: Russia’s natural gas exporter is channeling more money into its fight for market share as the U.S. threatens its biggest European pipeline project with possible sanctions and looks to deliver more fuel to the region by tanker. Gazprom PJSC plans to spend 802 billion rubles ($13.7 billion) on routes to Europe and China in 2018, almost 41 percent more than this year, according to a draft budget prepared for a board meeting Tuesday that was seen by Bloomberg News. The biggest project is its Nord Stream 2 link to Germany, which had planned to start borrowing from banks next year before being singled out in August for possible U.S. sanctions. The threat of U.S. measures against Nord Stream 2 has riled the European Union, which warned it could retaliate if hurt any of its companies or their plans, while Russia has said the U.S. is using sanctions to clear space for exports of liquefied natural gas. For more visit bloomberg.com or click https://bloom.bg/2oKbdKU 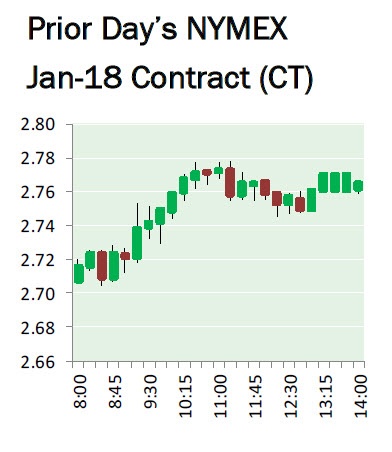