Irma on Collision Course with Miami

Winston-Salem Journal reports: Hurricane Irma continued on a collision course with Miami after battering Puerto Rico and devastating a chain of small Caribbean islands, as the Category 5 storm threatens to become the most expensive in U.S. history. The chances for a direct hit on Florida Sunday continue to increase, according to the U.S. National Hurricane Center, which posted hurricane and storm surge watches for the peninsula and Florida Keys Thursday. That prospect has roiled markets for everything from orange juice to insurance and natural gas. Barclays Plc has estimated insured losses in a worst-case scenario from the storm at $130 billion. A direct strike on Miami at Category 4 strength could lead to insured losses of $125 billion to $130 billion, Jay Gelb, an analyst at Barclays, wrote in a note Tuesday. Uninsured losses would add to that. Losses from Katrina, both insured and uninsured, reached $160 billion in 2017 dollars after it slammed into New Orleans in 2005. For more on this story visit naturalgasintel.com or click the following link http://bit.ly/2xai4Qa

Investing. com reports: U.S. natural gas futures edged lower on Thursday, after data showed that domestic supplies in storage increased slightly more than expected last week. The U.S. Energy Information Administration said in its weekly report that natural gas storage in the U.S. rose by 65 billion cubic feet in the week ended Sept. 1, just above forecasts for a build of 64 billion. Jose, heading for the Caribbean, strengthened to a hurricane and could become a major Category 3 storm by Friday, while Katia churned in the Gulf of Mexico, threatening to come ashore in Mexico. For more visit investing.com or click http://bit.ly/2wMnp0s 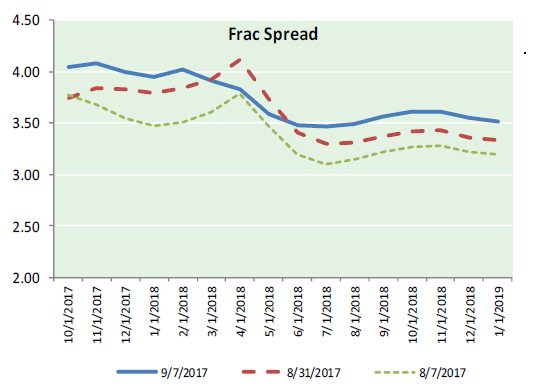 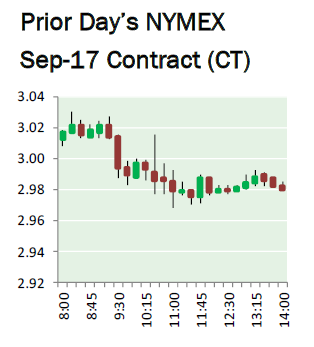