Gasoline prices: The front-month futures price of reformulated blendstock for oxygenate blending (RBOB, the petroleum component of gasoline used in many parts of the country) fell by 4 cents per gallon (gal) from November 1 to settle at $1.70/gal on December 7, 2017 (Figure 5). The RBOB-Brent crack spread (the difference between the price of RBOB and the price of Brent crude oil) fell by 8 cents/gal to settle at 22 cents/gal over the same period. EIA compares RBOB prices with Brent prices because EIA research indicates that U.S. gasoline prices usually move with Brent prices, the international crude oil benchmark. 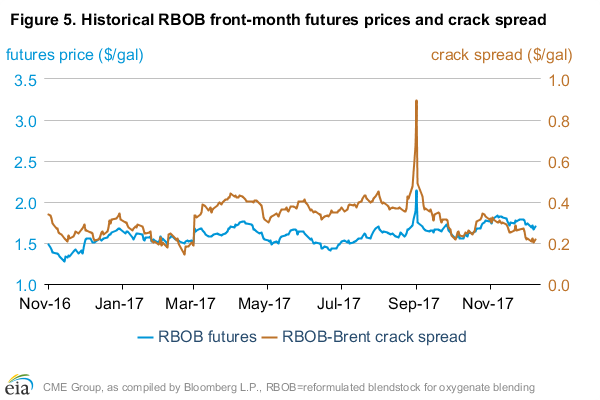 Ultra-low sulfur diesel prices: The ultra-low sulfur diesel (ULSD) front-month futures price increased by 3 cents/gal from November 1 to settle at $1.90/gal on December 7, 2017. The ULSD-Brent crack spread (the difference between the price of ULSD and the price of Brent crude oil) declined by almost 1 cent/gal over the same period, settling at 42 cent/gal (Figure 6).

Distillate stocks as of December 1, 2017, were 0.7 million barrels lower than the five-year average. The total of distillate consumption and exports rose to 5.3 million b/d for the four weeks ending December 1, which would set a five-year high, if confirmed by the PSM. Because of lower distillate stocks and increased distillate demand this year, the ULSD crack spread has remained higher than its five-year average each month since July 2017 and has also remained significantly higher than the crack spreads in the second half of 2016. 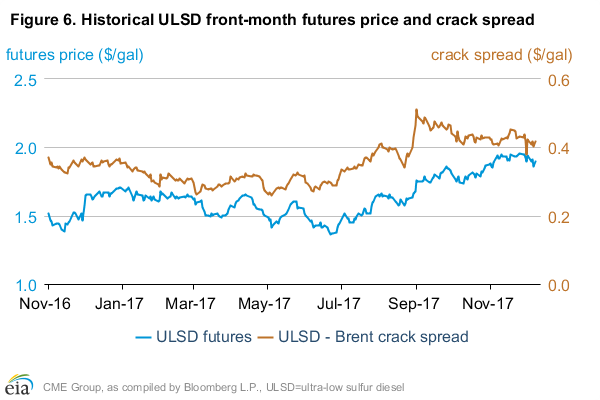 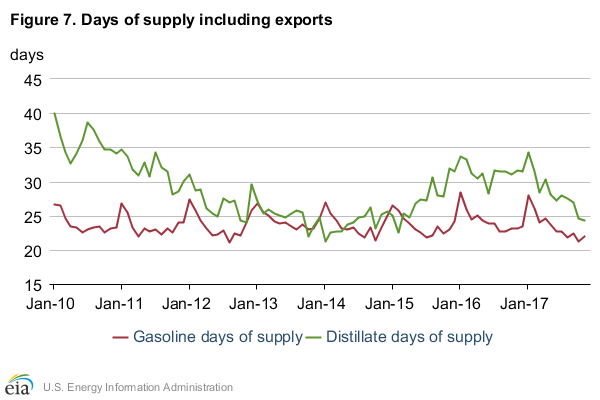